In this article, we are going to be looking at Roomba 650 vs. 690. These budget-conscious robotic vacuums are not newer but have more advanced features like the Roomba 890 or the Roomba 980.

The Roomba 650 is a bit older model and the Roomba 690 was actually introduced to replace the 650 and remains one of Roomba’s five flagship models sold on their website. So now, the Roomba 650 is only offered from third-party retailers.

The comparable features between the Roomba 650 and 690 are three-stage cleaning process, HEPA filtration, a virtual barrier, and infrared navigation.

And, we are going to discuss these features in great detail including design, usability, value, features, battery power, returns, warranty, and many other factors.

Roomba has developed several high-end robot vacuums with their new series, but both of these two vacuums the 650 and the 690 belong to the 600 series.

Although they are almost similar, the most noticeable difference is voice control and wifi connectivity which also increases the price tag of 690 due to these extra features.

So 690 can be a bit expensive but you can enjoy the voice command feature and scheduled cleanings through wifi connectivity.

The Roomba 650 an affordable vacuum that only comes with basic features that are justified by the lower price tag.

It comes with a three-stage cleaning process, spot cleaning mode, scheduled cleanings, and a handle to positioning it around your space. It does lack one or two more advanced features but the idea behind this robot was to be budget-friendly robot vacuum.

The Roomba 650 is suitable for those people looking for a robot with basic features but in a lower price tag. While it lacks advanced navigation and wifi connectivity, but scheduled cleanings and spot clean makes this robot vacuum worthy of your money.

The Roomba 690 robot vacuum comes with few similar features to the Roomba 650, but has updated look compared to 650 and boasts some advanced features like wifi connectivity and voice control. 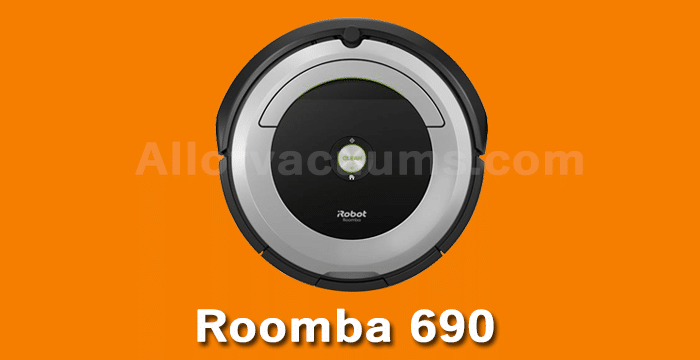 The advantage of these extra features is that you can simply control your robot using your smartphone and put it on scheduled cleanings as well as connect it with your Amazon Alexa or Google Assistant device to operate the robot using voice commands. This wireless connection allows for a sleeker look on the robot itself and puts the power in your hands.

Regarding design, there are a lot of similarities between the bot robots. The Roomba 650 has a mainly black body with a slight melon colored accent distinguishing the buttons section. The colors of the button are silver for an extra visual pop.

The 650 features a handle like Roomba 690 at the front side, and at the back side is dust bin release level. However, the 650 not only contains the “CLEAN” button but: 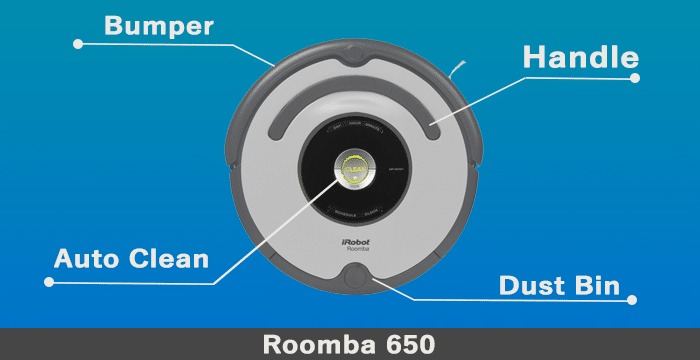 The Roomba 690 is almost similar to the 650 model. The only differences here are aesthetic. The 690 comes with a black and silver scheme with neon green accents that point out the lift handle or dust bin release on the body.

The central control pad compared to 650 is simplified. The wifi capabilities, schedules cleanings, and some other settings can be accessed via a smartphone app. Similarly, you can also use Amazon Alexa or Google Assistant. 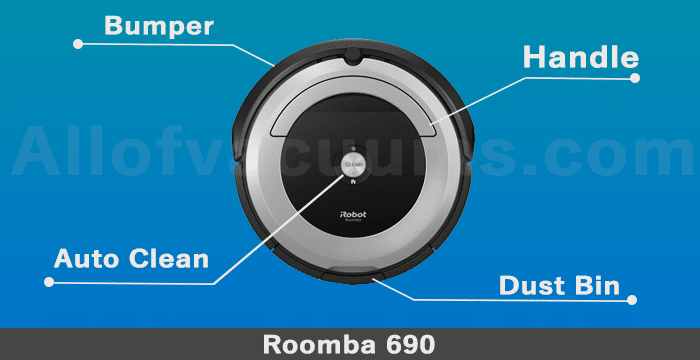 Although the Roomba 650 lacks memory feature, the dirt detection feature allows this robot to sport the dirtiest places in your home. With the help of infrared light scan 60 times per second, the robot figures out the navigational path to reduce bumps and bruises.

Furthermore, the three-stage cleaning process allows the robot to agitate, brush and suck any type of debris across any type of floors. The bristles brush agitates the debris and the spinning side brush gathers debris from the edges. Once all debris is in the path of the central brush roll, the vacuum sucks it up and transmits it into the dustbin.

The Roomba 650 shares a similar cleaning process like of the Roomba 690 and uses the same basic parts to do it. 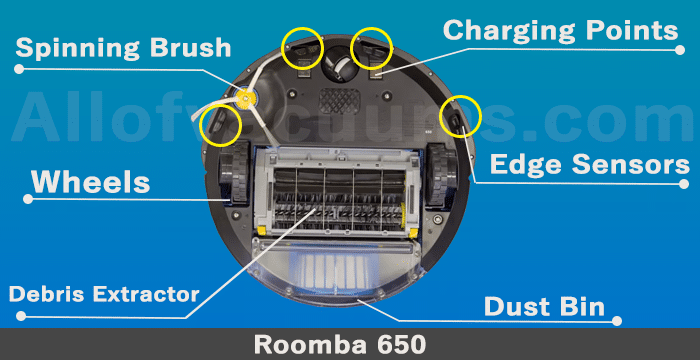 Pet owners will find the bristle brush roll on both of these vacuums a little difficult. But, the other robot vacuums like 870, 890, 960, or 980 are equipped with advanced dual brush rolls which use rubber debris extractors to prevent tangles and suck let of pet hairs.

The parts that part of cleaning is: 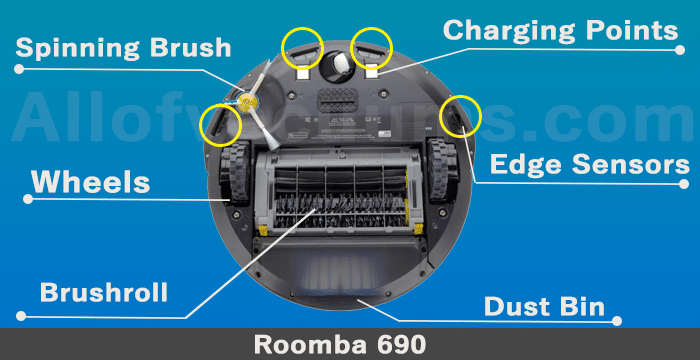 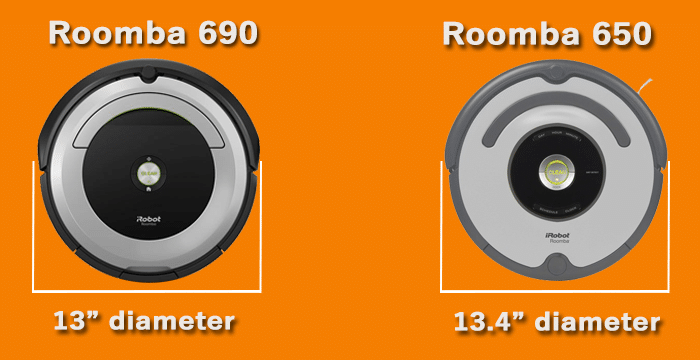 The Roomba 650 comes with the following accessories and parts:

The Roomba 690 comes with the following accessories and parts:

The virtual barrier of the Roomba 650 can only be used for straight paths and doorways, while the Roomba 690 model barrier can operate with two separate models.

One to create a straight path and Halo Mode to create a 4' diameter zone like around the furniture or pet food area.

The Roomba 650 is easy to use and it can be put to cleaning job right out of the package.

To start a cleaning cycle, simply hit the "Clean" button or put it on a schedule for later cleaning.

The Roomba 690 has consistent usability like other models which is simple, easy, and time efficient.

As the Roomba 690 brings the wifi connectivity, so installing the application in your smartphone can take a few minutes to make it ready to clean.

The Roomba 650 is good in terms of maneuverability. It falls under 4" for the height and has 13" diameter of width. With these specifications, navigation of the Roomba 650 becomes a bit sporadic. As it lacks the memory feature, so the navigation totally depends on the bump ring, drop detection, and infrared sensors.

At this point, you should remember that the Roomba 690 is almost identical to the 650 model. Having the same height of 650, the 690 is 0.4" narrowed, but regarding maneuverability, this small difference is negligible.

The advanced virtual barrier is very helpful for the Roomba to navigate around difficult furniture or awkward spaces.

Regarding navigation, both the Roomba 650 and 690 use iAdapt 1.0 without any memory feature. Therefore, the traffic pattern is slightly sporadic, moving in straight lines until it bumps into an edge, to rotate and turn around.

The maintenance of the Roomba 650 is comparable with the Roomba 690. Empty the dust bin, clean larger brushes and extractors, and clean and replace filters.

The replacement parts bought from iRobot can be slightly expensive, but third-party vendors can give you at a lower cost which can reduce the annual costs.

The Roomba 690 has similar maintenance to the 650 model. Being in the 600 series, they have similar parts and replacement procedures.

The annual maintenance cost for the Roomba 690 is also $33.

As with the Roomba 650, you can get branded parts from iRobot for 690 or go to third-party vendors.

The Roomba 650 comes with a Lithium-ion battery of 3,000 mAh which gives a run time of around 60-90 minutes, depending on the mess and obstacles coming in the robot way.

It takes about 2-3 hours to fully charge.

The Roomba 690 comes with a Lithium-ion battery of 1,800 mAh and gives the run time of around 60 minutes, sometimes longer depending upon the complexity of the floor and level of clean.

The Roomba 650 makes considerable noise of 61 dB from a distance of 3 feet which is quieter.

The Roomba 650 not only delivers solid value but also simplicity, a sleek design, dirt detection navigation, and scheduled cleanings. Furthermore, the replacement parts can be obtained by third-party retailers.

The 650 model comes with a battery that gives longer run time, the same HEPA filtration system (AeroVac), and the same style brush roll. The other type of filtration like AeroForce is available in more advanced models like Roomba 890 as well as dual brush roll debris extractors.

iRobot is the most widely known manufacturer of Robot Vacuums. All of their products have a large number of positive reviews and the company has no record of questionable practices or frivolous consumer lawsuits.

On the other hand, the Roomba 690 delivers great value. It not only comes with features of the 650 but also extra features like schedule cleanings, wifi connectivity and has easy to use design.

Although the price tag is higher than the 650 but the advanced features like voice control, advanced virtual barrier and wifi connectivity are worth for that price. The barrier is useful if you have pets around or you simply want not to steer the robot in radial areas.

So in the fight of Roomba 650 vs 690, which Roomba wins and which one you should buy?

Both of these vacuums deliver outstanding performance, efficient cleaning power, despite their simple features. Regardless of the advantages and disadvantages of both vacuums, the winner of Roomba 650 and 690 comparison is the Roomba 690.

The Roomba 650 and 690 both are the part of 600 series which means they have a range of similarities like:

Some features that are only available in the Roomba 690

Here comes the list of some other comparisons for you:

The Roomba 690 brings additional accessories than the 650 like advanced virtual wall barrier. Despite this small difference Roomba 690 is the winner.

The Roomba 690 performs better than the Roomba 650 across all flooring types, so the winner is 690.

Both robots have good usability, but the wifi capabilities and voice control feature make the Roomba 690 win this point as well.

Maintenance cost for both vacuums are identical so this category has a draw.

The Roomba 650 comes with a 1,800 nickel hydrate battery while the 690 comes with a 3,000 mAh lithium-ion battery that gives longer run time, but the 650 can be upgraded with the same battery to gain similar performance like the 690.

Should You Buy the Roomba 650?

The Roomba 650 is a quality vacuum cleaner that and still popular in the list of budget-friendly robot vacuums. The only disadvantage of this robot is the bristle brush but the 690 also uses the same brush so it's a non-factor in this comparison.

The alternative to this brush is an advanced dual debris extractor system that is available in the Roomba 800 series and prevents unnecessary tangles which makes it a great option for pet owners.

Should You Buy the Roomba 690?

The Roomba 690 is a great vacuum cleaner with a slightly pricier tag than the 650, but still a budget vacuum. Comes with excellent features like wifi connectivity, scheduled cleanings, voice control, and upgraded virtual wall barrier that makes the 690 a step ahead of the 650.

As the Roomba 690 is a flagship model, it's also available in the official website of iRobot as well as on many third-party retailers. if you're looking for an affordable robot vacuum cleaner with amazing features, the Roomba 690 is an ideal choice.

In this article, we explained Roomba 650 vs. 690: Differences & Similarities to help you make a better decision. The pros, cons, features, functions, and other options are described in greater details for your comfort.